C21 has announced the eight dramas bidding to attract additional finance and coproduction partners through the first Drama Series Pitch, which will take place on Wednesday November 29 at Content London.

The eight projects were selected from 42 submissions from established drama creators worldwide.

The projects will be pitched in front of conference to a panel of key international buyers and commissioners between 4pm and 5.30pm on Wednesday November 29.

The winning project will be announced at The International Drama Awards, which take place between 6.30pm and 7.30pm on the same day.

The Drama Series Pitch is a new way to launch drama series to the international market. C21’s editor-in-chief & managing director David Jenkinson said: “Each of these eight projects already has some finance or local broadcaster support in place and is looking to complete finance from the international market. It will be fascinating to see these shows pitched to a room full of drama executives and we hope the initiative will be seen as a creative new way to bring series to market.”

The eight shows selected to pitch are:

The Sounds
All3media, South Pacific Pictures
From best selling New Zealand author Sarah-Kate Lynch comes a thriller that takes a missing persons case and a family drama and flips them on their head: Welcome to Pelorus – the sleepy seaside hamlet where nothing, including the visiting Cabbots, is quite what it seems. Set against the beautiful backdrop of the South Island of New Zealand, this mystery combines the multiple layers of Big Little Lies with the complex character dynamics of The Affair, to bring a refreshing take on the relationship based thriller.

Maggie and Tom Cabbot are sailing in the remote pristine beauty of New Zealand on their new yacht when Tom heads off in his kayak… and doesn’t return. And when the search turns up the remains of a local teenage girl, murdered 15 years earlier, long buried wounds surface in the small, seemingly close-knit town. With unforgivable betrayals and secrets simmering beneath every surface, this is a story of greed and how far we are willing to go to protect ourselves.

Lover
Zodiak Finland
Alex Worley has it all; a smart, sexy wife, kids, a home and a career in the ministry of foreign affairs. But Alex has a secret.

Alex moonlights as a male escort with a jet-setting clientele and access to the boudoirs (and secrets) of some of the most beautiful and influential women in Europe. His two worlds collide when Alex's work for a Swiss heiress puts him on the radar of a ruthless Russian crime boss, and his journalist wife starts investigating a prostitution ring story. At the same time, Alex is juggling his sister’s dangerously poor taste in men, his dying mother’s long-buried secrets and the demands of the Ministry when Russia goes on the warpath in the Baltic.

How far is Alex willing to go to protect those he loves? How much longer before the truth comes out? At its core, Lover is a smart, exciting peek inside the head of a complicated man.

Surface Tension
Awesome/Wall to Wall
It’s one year after the ‘sea sickness’ has taken hold, when 99% of humanity walked into the oceans and disappeared. The survivors on a British channel island, cut off from the world, are finally moving on…until one woman returns from the water. Is she humanity’s salvation…or the harbinger of our extinction? Based on the critically acclaimed graphic novel by Jay Gunn.

Developed by Wall to Wall Television and Awesome, Surface Tension is a character-driven, returnable series that explores the nature of humanity amid an environmental and existential crisis.

The Bonfire of Destiny
TF1
The Bonfire of Destiny is a period drama series based on a true event that took place in Paris in 1897 when a terrible fire destroyed the building hosting the city’s annual charity Bazaar. The tragedy that left over a hundred victims, gives three women the opportunity to break free and change their destinies.

The Spanish Doctor
Sphere Media Plus
The Spanish Doctor is an epic historical medical drama set at a time of brutal religious persecution. Barely out of the Dark Ages, with the Spanish Inquisition looming darkly on the horizon, Toledo remains steeped in superstition, magical thinking and intolerance. Avram Halevi, skilled surgeon trained in Montpellier, returns to his home with a belief that progress and science will prevail. But as the Catholic popes fight for power, Avram is forced to choose between his hippocratic oath and the need to do violence to prevent harm. Scalpel and sword. Blood and bloodletting. Who will survive?

The Window
Boogie Entertainment/ZDF Enterprises
The Window is a one hour primetime drama series with a strong thriller element that takes an inside look at elite professional football and the business that surrounds it. Centred on a group of players, agents, board members, administrators and journalists (as well as their families and friends), the series goes beyond winning and losing games to explore the full, dark circus of this multi-billion dollar business.
The series begins at the end of the English Premier League season. The champions have been crowned. The relegated teams drop down a division. And of course the transfer window opens... Across 10 episodes The Window charts ten tense weeks in the life of Jordon Burdett, a 17 year old Wunderkind with a golden touch who has gate-crashed his team.

ARCTIC CIRCLE
Lagardere Studios / Yellow Film & TV
In the small town of Ivalo, local policewoman, NINA KAUTSALO (30), discovers an old cabin in the wintry back country of Finnish Lapland. Inside, she finds a chained-up prostitute in bad shape. The woman is rushed to the hospital where a blood sample is taken and sent to Helsinki for analysis. Before agents from the National Bureau of Investigation arrive on the scene, Nina locates two more victims in the cabin—these ones dead. The kidnapping case instantly turns into a murder investigation and the NBI takes over.

THE 5th AGE
Mocka Monitor
In the 5th Age, the collapse of the global economy has shaped Europe into a place where the daily fight for power and control is dominating the continent until a seemingly minor incident unleashes an ever-growing battle between the young and old, the weak and powerful, the future and the past. Who will prevail to determine the fate of all generations to come?

The Drama Series Pitch is part of The International Drama Summit at Content London.
For full event information CLICK HERE. 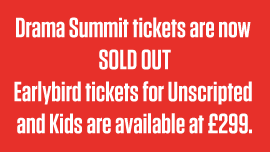 more
This error message is only visible to WordPress admins

Please go to the Instagram Feed settings page to create a feed.